Zen and the Art
of Roasting Coffee 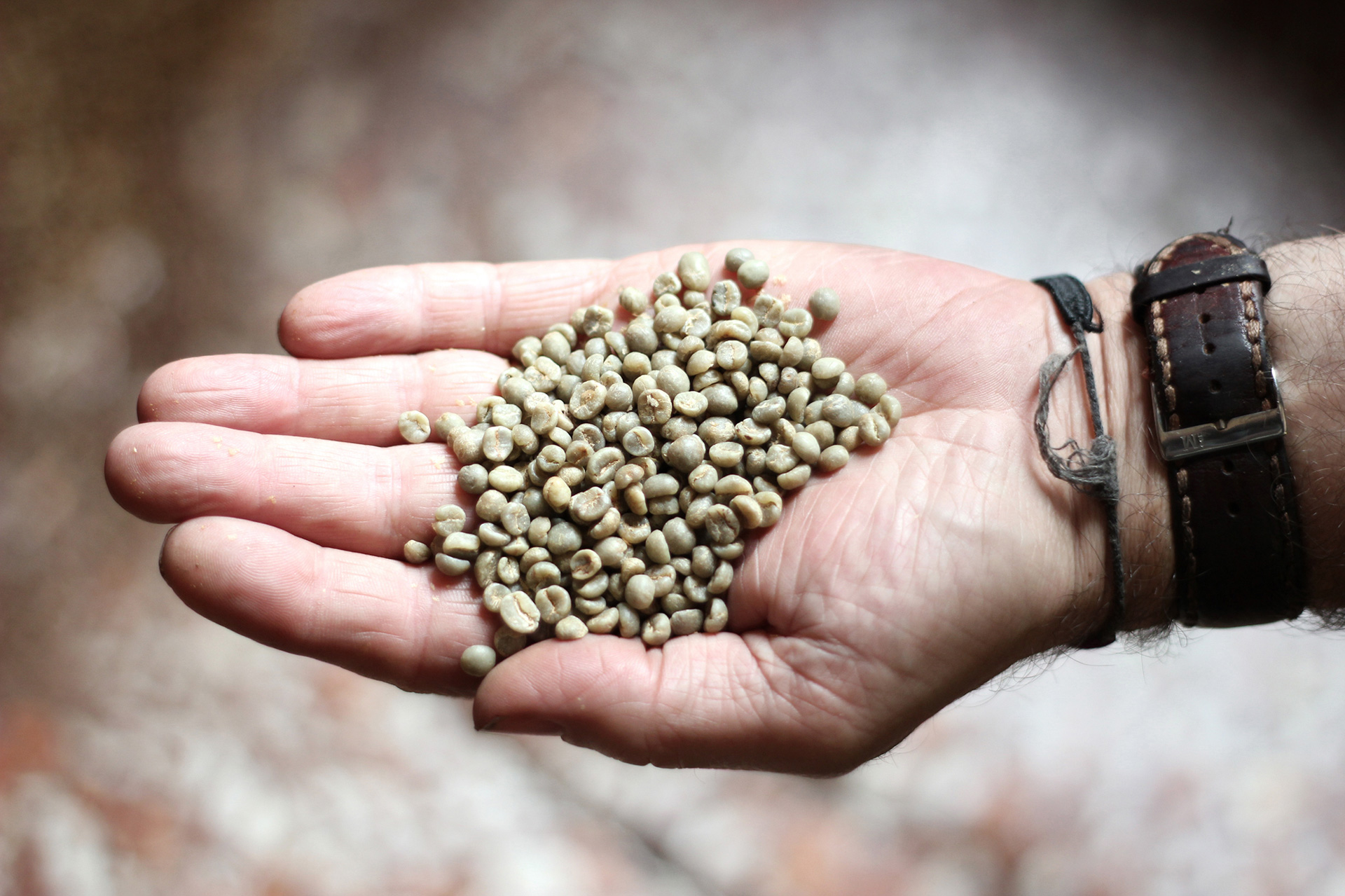 (How mindfulness brings meaning to process)

The title Zen and the Art of Roasting Coffee is shamelessly borrowed from the bestselling self-help book of the 1960s's "Zen and the Art of Motorcycle Maintenance". It was one of those books that was on my reading list in my formative years growing up in the 60s and 70s along with classics like JD Salinger's "Catcher in the Rye"and "On the Road by Jack Kerouac, or Laurie Lee's "As I walked out one Midsummer morning…" All books with titles that caught the eye and caught the imagination of my eighteen year old self, as I was about to embark on my own quest into the world.

I have to say I remember the title more vividly than I remember the contents and I've certainly never found Zen in maintaining motorcycles. In fact I spent the whole day yesterday, when I should have been roasting coffee, trying to fix a V-belt on a badly wobbling drive wheel on my 75 year old Uno coffee roaster, which just left me feeling generally frustrated and bitterly disappointed at my own inadequacies as an engineer. This is in stark contrast to my usual feelings of blissful contentment on a Saturday, when all is going according to plan and the machine is purring like a kitten and producing batch after batch of beautiful coffee. Instead of which I was grovelling around on the floor on my hands and knees trying to coax and cajole the machine back into life. 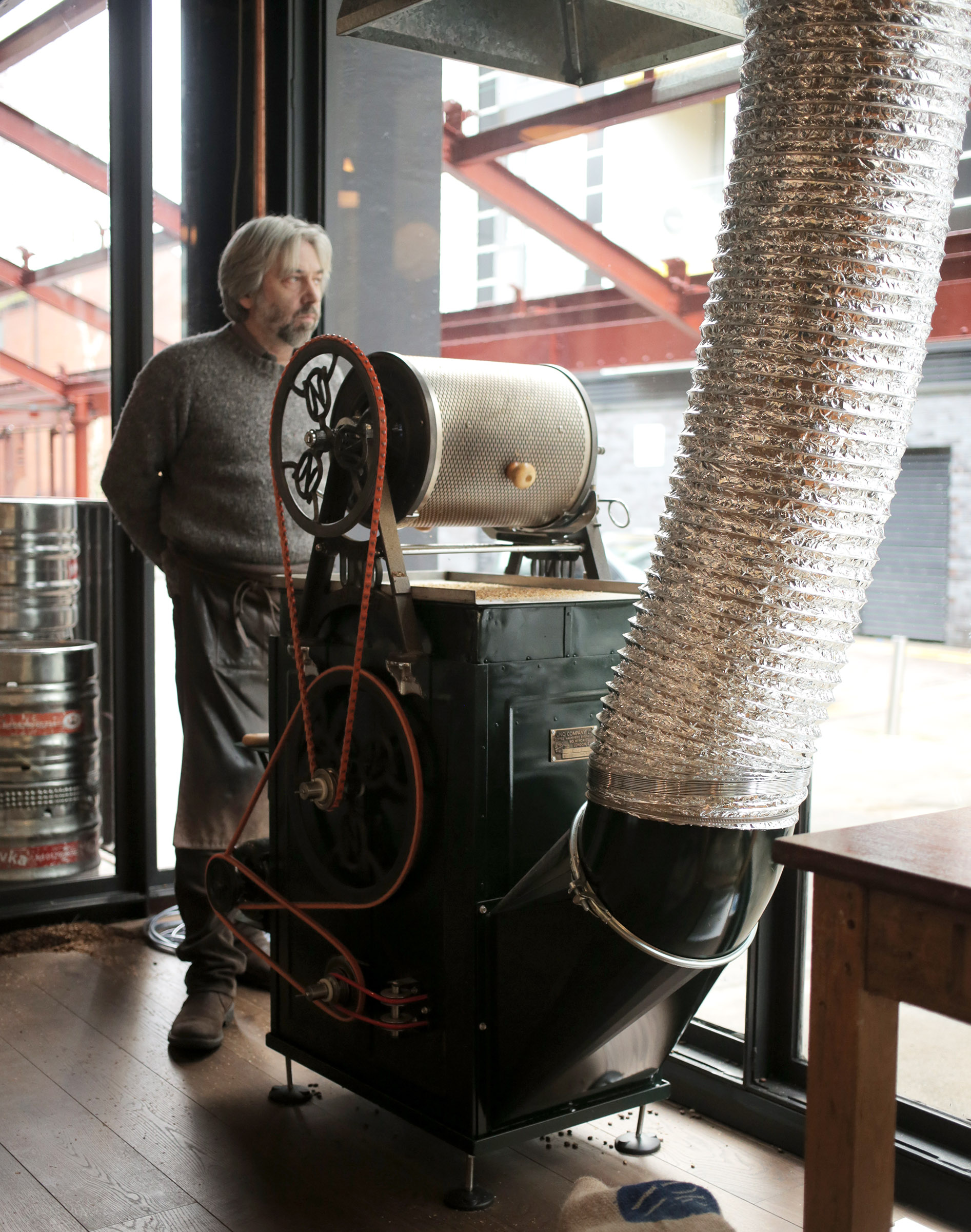 Let me tell you a little more about this remarkable and usually reliable machine that has been standing in the same spot since 1945. Countless batches of coffee have since gone through its drum and dropped into its cooling tray. It has worked far beyond its designated duty cycle whatever that may have been and contributed way beyond its return on investment for the company. It is a beautifully simple, elegant piece of engineering.

It is made up of a basic collection of geometry: circles, triangles, rectangles, cylinders, cubes and A-frames. I love the fact that the flame inside the drum is in a single helix spiral along the centre of the axle, as if seeking to unlock the DNA of the very bean to develop those 1,500 flavour compounds locked within. What distinguishes it from other roasters however is its openness… yes it's open flame and other roasters have direct flame licking the beans into shape, but this machine is 'open drum'. Roasting coffee on this machine is a full-on sensory experience, you have to open your eyes to the changing chaff and your ears awaiting first crack and your nostrils to the warm toasty smell from the smoke, open your heart, open your mind to what is going on inside the drum. It's visceral, hitting you in the solar plexus.

When I am standing in open stance in front of the machine ready to receive a million sensory messages, that is when I know I am 'in the moment'. I was told by my predecessor who had roasted there for 50 years, that every revolution of the drum counts and that crucial piece of timing, that momentous decision at which point to drop the beans into the tray, can be make or break a roast, with a turn too far or stopping too soon wrecking the whole process.

At that point, as another fourteen pounds of beans is ready to cool, soon to go in one of the one stone canisters, I think about the countless number of coffee moments we have created for the waiting customers. Those who have followed their noses to the Roastery door, who have been lured in by our ancient form of 'nasal marketing', the coffee smoke that drifts across the city, a last remnant of its olfactory landscape.

Of course, as the proprietor of the business I don't have to devote my Saturdays to this menial task as a technician but it is a role I relish for it is at the heart of what we do. The Roaster occupies the middle ground between the producer and the consumer. As such I feel compelled to connect the two. To tell the stories of the Coffee Farmers to an attentive customer joins the dots of the value chain. The marketeers call it Narrative Retailing and I feel privileged to be in the position of telling the stories of the various coffees to the general public.

At the end of a day spent in front of the Roaster, my clothes reek of coffee smoke, my hands are black with the grime of axel grease and often a line of black warpaint is slashed across my brow from some inadvertent wiping off of the sweat of toiling in front of the flame, with a hand that has just picked out a rogue bean, charred from being stuck in some cranny, a stowaway hitching a second ride inside the drum. I feel as in touch with my chosen craft as I could possibly be in that primeval environment of fire and iron.

At the end of a long session standing on the hard terrazzo floor of the Shop, my body tired with a wholesome ache, I feel like my soul has had a high octane top-up of meaningful purpose. The simple repetitive act of roasting has taken the green beans, a primary agricultural product from a farmer in a developing country and split them, like a chemical chain reaction, into hundreds of thousands of coffee moments for the thousands of customers, that will press pause and enjoy them over the next few weeks…

So, you can see that, inevitably, when roasting coffee, my mind is filled with other thoughts than just the 'here and now' of chemical and physical changes within the drum. The primal act of roasting the beans with the transformational, elemental addition of fire, takes me back along the supply chain to those we have met at Origin. Those who have invested so much more into the preparation of these beans than my meagre 15 minutes of flame…
RELATED PRODUCTS

Not Neutral Mug
White / Ceramic
£20.00
Newsletter Get 10% off your first order by signing up to our newsletter.