Opening Hours
How Green is my Alley?

(The Invisible Building: an Eco-Roastery between the Shop & the Café)

When I attended the Roaster’s Summit in 2009 in Köln and went along to the European launch of The Loring Smart Roast, I never dreamt that one day we would be in the vanguard of the new eco-Roasters with shiny stainless steel machines. In that German Gothic City, at that time I was part of the old guard, roasting defiantly on the type of big black heavy-metal cast-iron machines, on an open flame using technology unchanged since the 1930’s.

So, what happened to change my mind?

Let’s look at where we were: Our main production facility consisted of two Whitmee Roasters from the mid 30’s - a 28 pounder and a 56 pounder (they even sound like artillery from that dark decade!) The 14lb Shop Roaster, having been installed in 1945 just after the Second World War, was still doing a great job coping with smaller batches and drawing people in off the street with its heavenly nostalgic smell. Production roasting in the back however was dark, noisy, loud, inefficient and dangerous. During the last expansion seven years earlier we felt our USP was tied up in this vintage equipment and felt we had to replace like for like. Hence the restoration of the 56lber when we needed to double capacity from the 28lb machine. 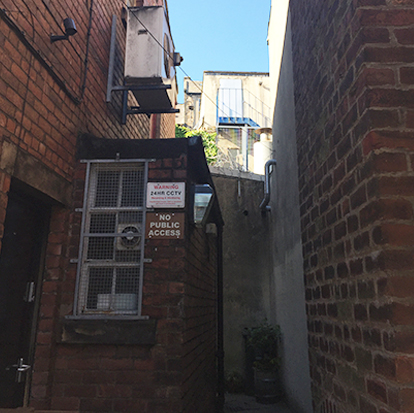 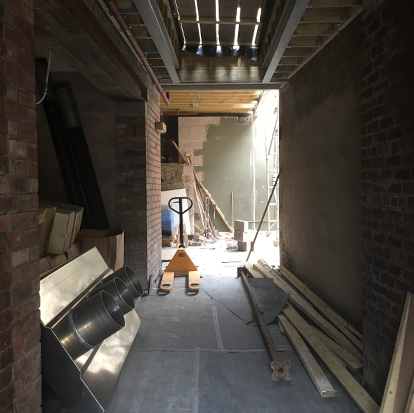 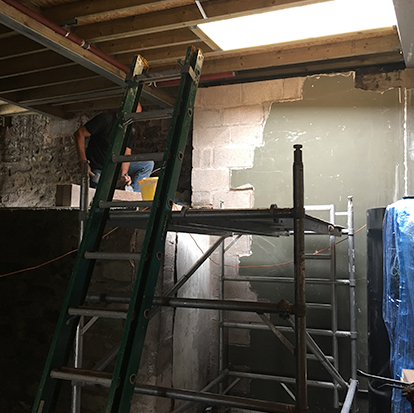 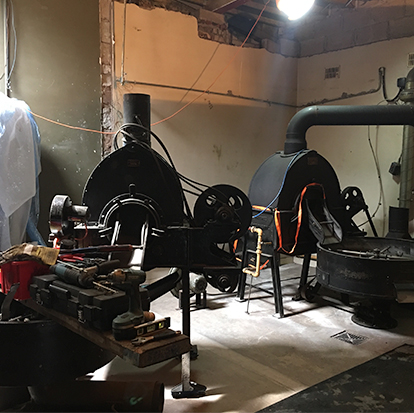 Having grown more comfortable in our roasting rôle in the intervening years, we also felt more confident and hungry to embark on a new learning curve. I felt we were asking too much of the Whitmees. 2 tonnes a week in your 80th year is a big ask! They had over-reached their duty cycle and more than fulfilled their their return on investment. Heritage on its own was not enough of a differentiation any more. Most of our business initiatives have been quite progressive. We wanted to show that we could blend Heritage & Innovation in a striking juxtaposition.

We embarked on a massively complicated building programme to expand into the only place that was left to us. It would’ve been so much simpler to have rented a unit on the outskirts of town but we wanted to keep the Coffee Quarter in tact. We wanted to honour the continuity of coffee roasting that had been going on here for the last 180 years. So we broke out into the gap between the Shop & the Hall café.

We set about transforming this dark, dingy alleyway and back-yard strewn with disused needles, from an unloved snicket of urban decay into a biofilial, feelgood, productive workspace with sun tunnels in the ceiling giving a light and airy natural light, natural materials all around, a perfectly sloping insulated floor below for the smooth arrival of goods inward, a living roof above and lots of lovely elbow room! At the heart of this new ‘invisible’ building would be the Future, visible from the street, the core of our business; The Roaster… 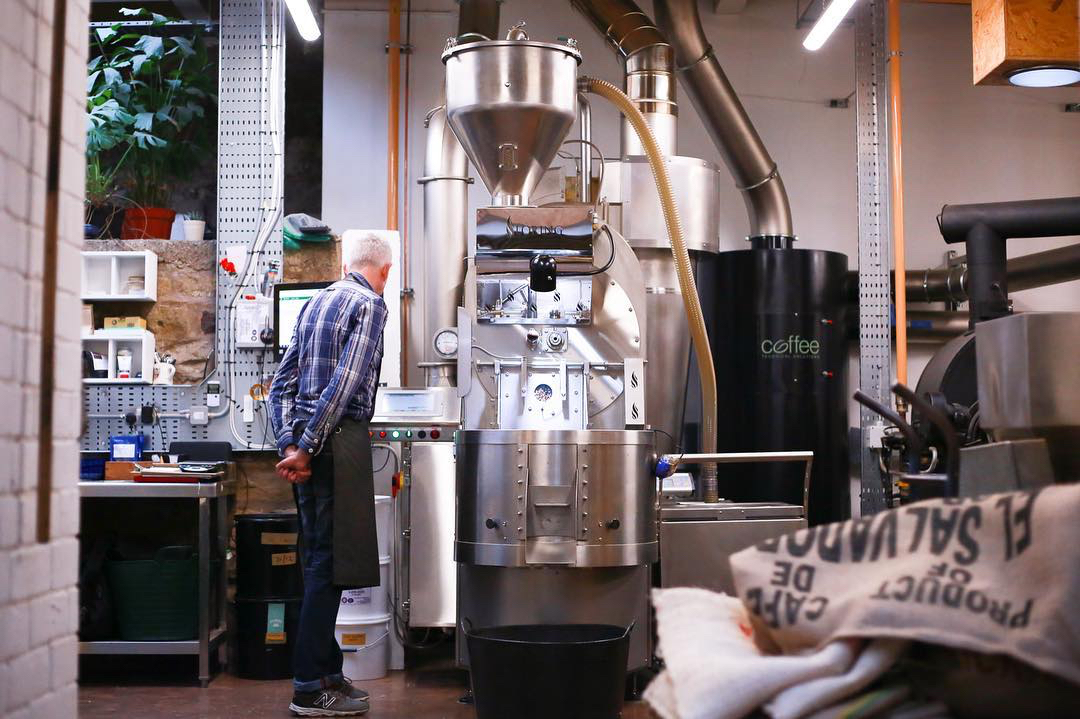 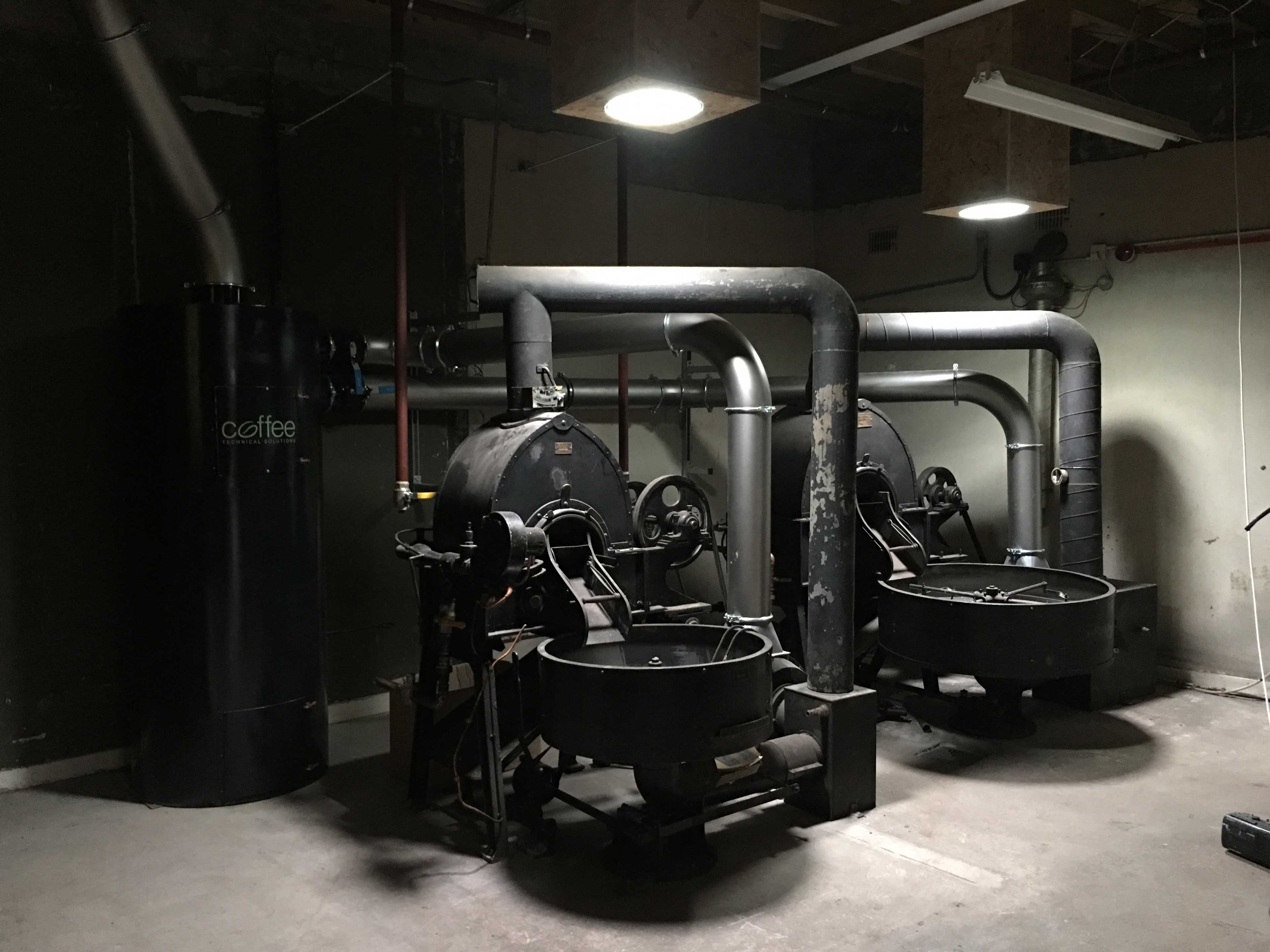 The Loring Kestrel SmartRoast features a unique hybrid roasting technology that cuts greenhouse gas usage by up to 80%, lowers emissions and reduces oxygen during the roast.  These advantages over traditional roasters bring about faster more expedient roasting sessions, a more environmentally-friendly, safer operation and a cleaner, brighter cup of coffee.

We followed the progress of our Roaster on a Shipfinder App as it made its way from Oakland CA through the Panama Canal, changing ships at Bélize and finally crossing the Atlantic to land at Liverpool.  And as the ship made its steady progress our builders did too, hitting their deadlines despite the confines of this difficult space between medieval, Victorian and Art Deco buildings. We stopped the traffic on the main A6 early that summer morning when our Roaster arrived and with expert tele-handling of a supersized forklift we inched the two huge crates in through the arched entrance, no-one quiet believing that they would really fit through.

We skipped several generations of technology in installing this Roaster but we also created the leanest, greenest and meanest coffee roaster in the North of England! We package this coffee for our customers in the shop into 100% fully compostable bags and our multi-use plastic eco tubs make countless round trips to our local wholesale customers.

We have products on our shelves that have made their way to us from exotic locations all over the globe. They arrive by ship to lessen our carbon footprint and once they get here we do what we can to keep that footprint from getting any bigger. Thinking about our environmental impact is something that is engrained in our company culture. Doing something about it takes a continuous effort and in the case of our Roastery a huge investment of Financial and Human Resources to ensure that our legacy for the next generation puts us in a more sustainable place. 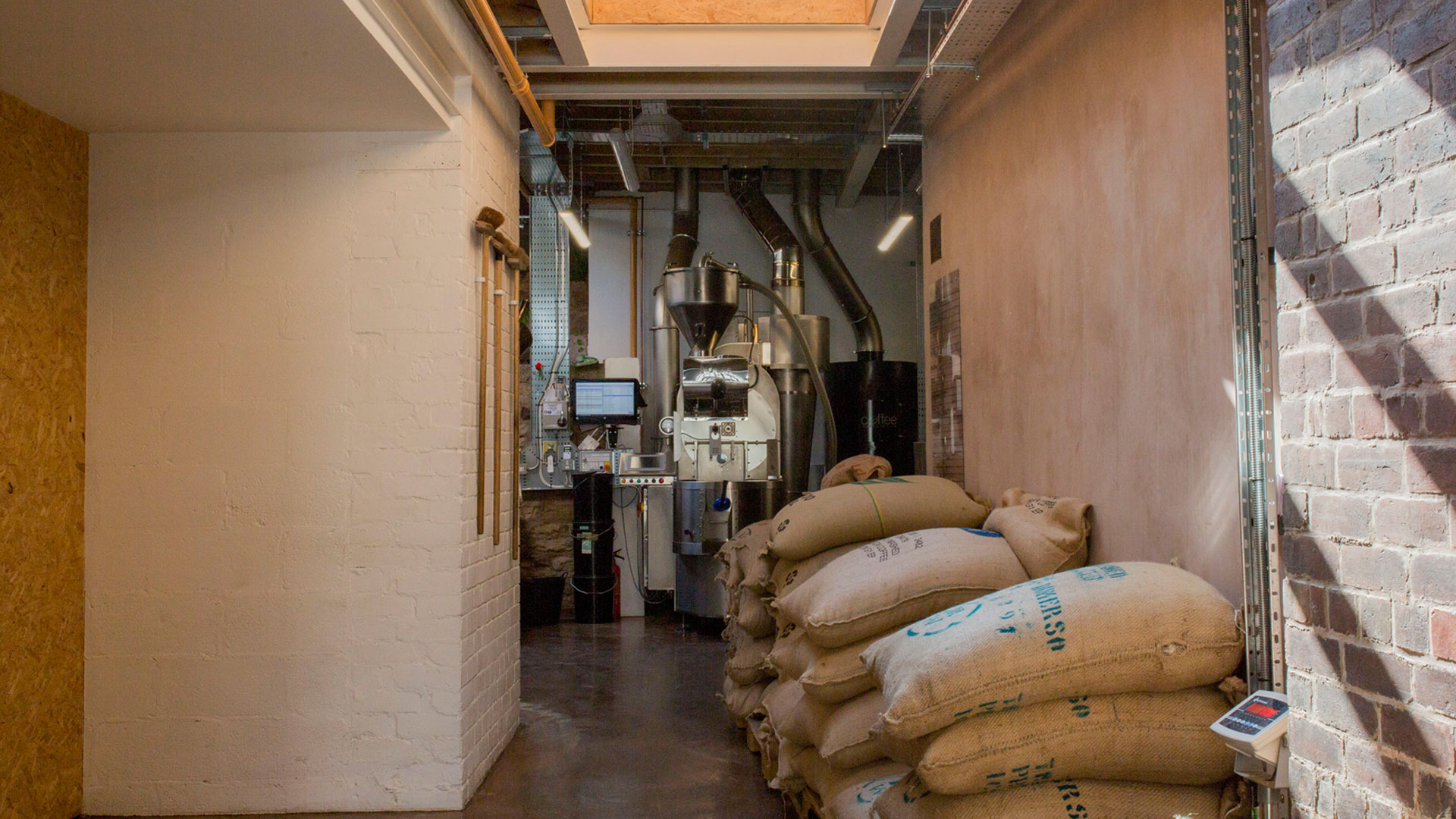 Newsletter Get 10% off your first order by signing up to our newsletter.